Let me be clear on one point: I can’t predict the short-term movements of the stock market.

I haven’t the faintest idea as to whether stocks will be higher or lower a month — or a year — from now.

What is likely, however, is that the market will move higher, perhaps substantially so, well before either sentiment or the economy turns up.

So, if you wait for the robins, spring will be over.

That comes from one of the most successful investors of all time, Warren Buffett.

The idea closely relates to a point we make often in the Digest – trying to time the market so that you don’t buy until prices have bottomed-out is a fool’s errand.

By definition, a bottom can’t become the bottom until you’re looking at it in the rearview mirror from a higher price.

Given this, we believe the wiser approach is to ask: “Is today’s price one at which I’m likely to make great returns, say, three years from today?”

If the answer is “yes,” then buying is a good idea, even if prices head lower.

Today’s prices for certain top-tier stocks offer an attractive entry point for long-term investors. And that’s even if this bear has another swipe coming.

Part of the reason why reduces to the disconnect that has emerged between stock prices and the underlying operational condition of these quality companies.

Let’s look at an example, with a recommendation from our macro expert Eric Fry.

Finding an “inevitable” investment worthy of your money

Regular Digest readers will recognize the term “inevitables,” which was popularized by Warren Buffett.

It’s the word he coined to describe businesses with huge competitive advantages that dominate their industries.

Companies such as Coca-Cola and Gillette might well be labeled “The Inevitables.”

In the end, however, no sensible observer – not even these companies’ most vigorous competitors, assuming they are assessing the matter honestly – questions that Coke and Gillette will dominate their fields worldwide for an investment lifetime.

“The Inevitables” are no-brainer investments. You allocate your money, go live your life for a decade or so, then check your balance one day to find extraordinary growth.

Though inevitables refers to specific stocks as we’ve been using the term so far, we can expand it. Under the right circumstances, the term applies to an entire sector for which massive growth is inevitable.

One such sector worthy of this label is cybercrime (unfortunately).

The stories of hacks, ransomware, and phishing are relentless. I live in Los Angeles where just a few weeks ago, a massive ransomware attack hit the Los Angeles Unified School District (LAUSD), the country’s second-largest school system.

The criminal organization behind the attack demanded a ransom or else it would release sensitive data about the students. When LAUSD chose not to pay, the cybercriminals released some of the data. The story is still playing out today.

That was a ringing endorsement for the cybersecurity trend based on Eric’s investment track record. For newer Digest readers, Eric has dug up more 1,000%+ investments than anyone we’re aware of in the investment newsletter business – more than 40. Most investors are lucky to get one.

Let’s rewind to Eric’s September 2020 issue Investment Report for how he analyzed the opportunity at that time:

Most of the world’s leading cybersecurity companies have been growing revenues and earnings at high double-digit rates for the last few years.

That growth trajectory shows no sign of slowing down.

Yearly global cybersecurity spending is on track to rocket nearly 50% over the next five years. And it’s not hard to imagine that an increasingly technological world will produce ever-growing demand for cybersecurity solutions.

Given this, Eric recommended his Investment Report subscribers buy the ETFMG Prime Cyber Security ETF (HACK).  But that recommendation came with a major disclaimer:

A word of caution: Like most stocks in the pricey U.S. stock market, the leading cybersecurity stocks are not cheap, based on traditional valuation measures.

The HACK portfolio, for example, is trading for 35 times gross earnings (EBITDA). That’s roughly double the valuation of the S&P 500 Index.

Despite my bullish expectations for the sector, let’s exercise a bit of patience with this recommendation to see if we can pick it up cheaper than it is today.

For now, I’m recommending that you pay no more than $41.25 to establish a new position in this ETF.

So, how did this play out?

At the time Eric brought HACK to his subscribers, the ETF traded at roughly $47 per share. Over the next year or so, it soared about 45%, never giving subscribers the chance to buy in.

I imagine that climb produced frustration for investors who had sat on the sidelines, opting for caution based on the valuation.

But then the slide began…

HACK has sold off alongside the market all year long. But what’s happened to the economic fundamentals of the businesses within HACK?

The stock is now about 15% cheaper than it was when I first profiled it, even though the companies inside HACK have boosted their revenues by about 15% since then.

If we open the hood on HACK and look at some individual stocks, this discrepancy is even more pronounced.

Below, we look at HACK’s largest holding, Cloudflare (NET), comparing the share price to the revenue growth (caveat – the latest revenue data come from June).

Notice that while NET’s stock price has imploded 72% over the last 12 months, its revenues have climbed 24% as of four months ago.

That [revenue] growth trajectory will likely accelerate over the next few years, as cybersecurity becomes an increasingly essential priority for both enterprises and governments.

As the chart below shows, global cybersecurity spending is on track to grow more than 8% per year over the next few years, which would be at least double the rate of global GDB growth. 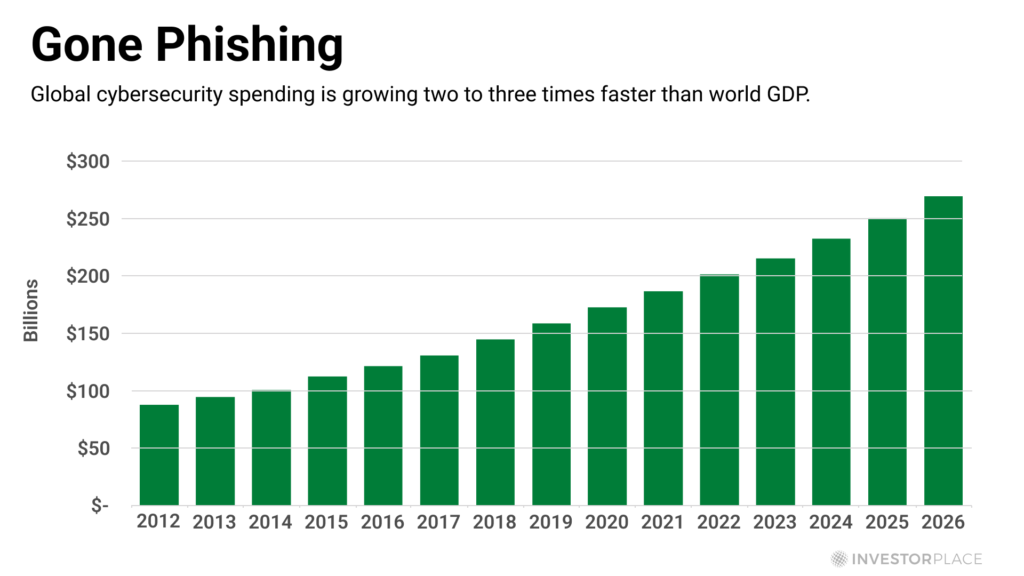 That rate of growth should boost both sales volumes and margins throughout the cybersecurity industry.

At the stock level, therefore, the companies comprising the HACK portfolio could produce annual earnings growth above 20% per year for several years running.

So, has HACK bottomed out?

Who knows. But for the long-term investor, it’s not all that important.

The companies within HACK are growing their revenues and margins. Eventually, prices will rebound to reflect this growth. Patient investors who understand this dynamic will be rewarded…even if HACK’s ultimate low remains in front of us.

By the way, HACK is a current, active recommendation for Investment Report paid subscribers. A big thanks to Eric for allowing us to spotlight it here in the Digest.

A divergence is this ultra-rare phenomenon, that occurs only about once a decade, wherein certain individual stock prices diverge significantly from their “true” stock prices, as determined by the company’s fundamentals.

The divergences always end with those individual stocks snapping back to their “true” stock prices, resulting in enormous returns for investors who bought during the divergence window.

Each time, they offered investors the chance to buy world-changing companies at blockbuster discounts.

Based on his broader research, Luke found that the average forward 12-month return in these divergence stocks was about 135% across all the examples.

You can check out a free replay of Luke’s event from last week right here.

Wrapping up, who knows where this market’s final low will be

While that answer is unclear, what is quite clear is that there’s a growing chasm between the operational strength of quality companies and their stock prices.

And for certain top-tier stocks and inevitable trends, that means attractive entry points for the long-term investor.

Are Retailers Good Buys Going Into the Holiday Season?