It’s not every day that Bitcoin gets kneecapped by a Nobel laureate economist.

But that’s what happened last week when Paul Krugman wrote an opinion piece for The New York Times that turned a blind eye to some rather important context, while ignoring logical consistency and key details.

For example, Krugman began his article by highlighting the market value of the crypto sector, having reached nearly $3 trillion by last fall. He then writes:

Since then, however, prices have crashed, wiping out around $1.3 trillion in market capitalization.

As of Thursday morning, Bitcoin’s price was almost halfway down from its November peak. So who is being hurt by this crash, and what might it do to the economy?

Let’s address the “crash” part of this before we move on to who’s being hurt and what it might do to the economy.

***Important context that Krugman didn’t include

The below chart comes from market analyst, Charlie Bilello. It details Bitcoin corrections and rallies since 2010.

In the “% Decline” column, you’ll see how far Bitcoin fell in various crashes. And there are a lot of crashes.

But in the “% Return to New High” column, you’ll see the ensuing percentage return Bitcoin tacked on in subsequent months on its way to a new high. And there are a lot of monster gains.

You’ll also see the chart is slightly dated, extending only through last spring. So, it doesn’t include the “51% drop” followed by a “127% surge” that Bitcoin investors experienced last spring through the fall.

But after every single crash (except the most recent), it has gone on to climb to a new high. This type of market action is simply part of Bitcoin’s DNA.

Krugman could have referenced that in his article. Maybe a line saying, “this latest price decline is completely consistent with Bitcoin’s history.”

A balanced analysis would have included this. Its absence leaves the impression that this particular crash is in someway unique or especially noteworthy.

***Who is being hurt by Bitcoin’s pullback?

Let’s move on to Krugman’s point about the alleged victims of the crypto sector:

And if you ask me, regulators have made the same mistake they made on subprime: They failed to protect the public against financial products nobody understood, and many vulnerable families may end up paying the price.

To be clear, I’m 100% in favor of government regulation that protects investors from crypto scams like what we saw with the Squid Game crypto. But that’s not what Krugman is saying. He’s villainizing the broad sector, calling out Bitcoin by name.

If Krugman wants the government to protect its citizenry from everything (most notably, ourselves and a lack of accountability to do our own research), then okay. Everyone is entitled to an opinion.

But if that’s the case, there’s a long list of things that need attention from the regulators before crypto.

Motley Fool surveyed over 1,500 investors about the GameStop debacle. They found that investors with one year or less of experience were the most likely to lose money during the GameStop frenzy.

So, how much did they lose?

This comes from Investors.com here in 2022:

It’s the first time many of the speculators playing these risky stocks, many with no fundamentals, have seen losses.

So, should stock speculators be regulated?

And why stop there? If the goal is protecting those who are more at-risk financially, what about the lottery?

A study in the Journal of Gambling Studies found that people in the bottom fifth of income spend the most on lottery tickets.

Nationwide, people who make less than $10,000 spend on average $597 on lottery tickets — about 6 percent of their income.

Spending this much money on lottery tickets is clearly not in the best financial interest of these individuals. Where is their regulation?

And what about broader gambling?

…as many as 23 million Americans go into debt because of gambling and the average loss is estimated to be around $55,000…

About six million adults meet the criteria as “problem gamblers” and 500,000 teens also fall into that same category.

Meanwhile, the Florida Family Policy Council as well as University at Buffalo Research Institute on Addictions (RIA), show that very low-income households have a nearly 100% higher rate of gambling than the general population.

However, at this very moment, states are legalizing sports gambling all over the United States. 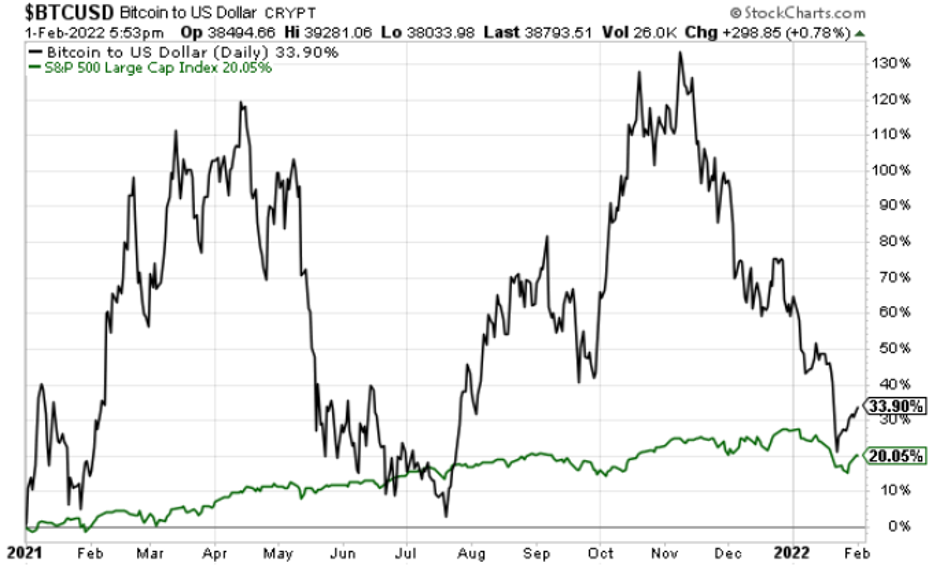 According to a survey by the research organization NORC, 44 percent of crypto investors are nonwhite, and 55 percent don’t have a college degree.

This matches up with anecdotal evidence that crypto investing has become remarkably popular among minority groups and the working class.

You might read this and scratch your head – “wait, so do these investors lose more money from crypto or not?”

That detail was missing in Krugman’s piece. He provides no data on the relative success of crypto investors who are non-white or don’t have a college degree.

Clearly, the financially-relevant point is not an investor’s race or graduate status, but when he/she bought and sold and what that means for profit or loss.

As far as we know, the investors Krugman references bought in 2018 and are sitting on healthy profits, despite the recent pullback.

***The difference between “volatility” and “risk”

Another point from Krugman:

And cryptocurrencies, with their huge price fluctuations seemingly unrelated to fundamentals, are about as risky as an asset class can get.

Though this is a common misunderstanding, I’m surprised Krugman misunderstands it. Price fluctuations, also known as “volatility,” don’t equal “risk.”

Volatility is a characteristic of an asset. It’s not an absolute measurement of risk that applies across the board.

For example, if stodgy old utility company, Duke Power, fell 5% in a day, would that be a big deal?

It would catch the eye, sure. That’s because its stock price is generally very stable day-to-day.

No. Tesla’s stock has far more ups and downs of this magnitude.

Look at Tesla versus Duke Power below over the last two years to see for yourself. 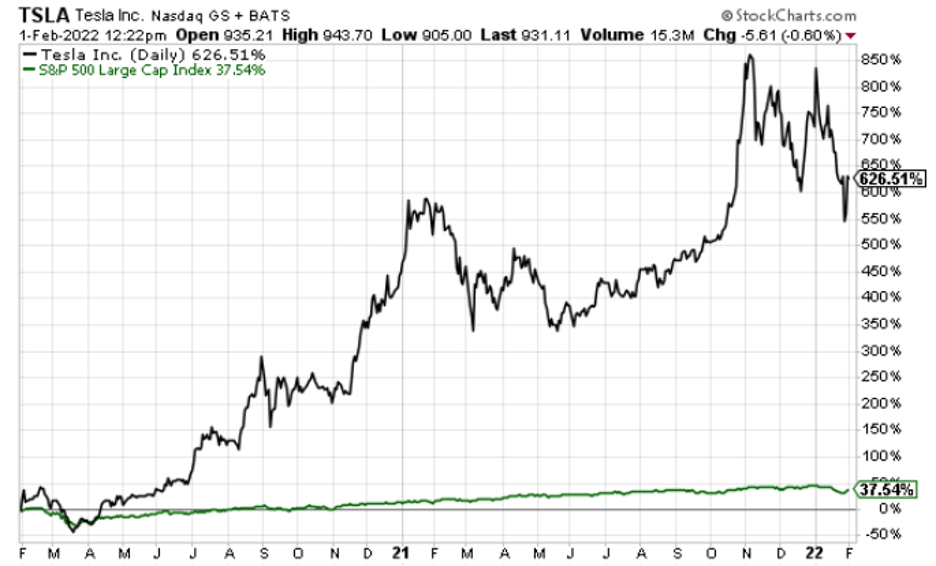 But take it one step further…

If Tesla is riskier due to its volatility, then why isn’t Krugman demanding greater regulation of Tesla shareholders? After all, just a few days ago, Tesla was down 30% from its high.

One final point that crumbles under scrutiny…

Krugman suggests cryptocurrencies aren’t good for much other than “money laundering and tax evasion.”

Never mind that, according to a research report from Chainalysis, in 2020, criminal activity accounted for just 0.34% of all cryptocurrency transaction volume.

Plus, in 2020, Rand Corporation found that despite the “perceived attractiveness of cryptocurrencies for money laundering purposes . . . an estimated 99 per cent of cryptocurrency transactions are performed through centralised exchanges, which can be subject to AML/CFT regulation similar to traditional banks or exchanges.”

But enough about Krugman. Let’s turn our attention to something that’s far more pressing for crypto investors today…

Our crypto expert, Charlie Shrem, puts it this way:

It’s no secret cryptocurrencies have had a tumultuous year so far.

In fact, the number one question folks are asking me right now is: Are we finally headed for a crypto bear market?

To be blunt, YES.

That is, for many — perhaps even most — cryptos…

But for the right tokens, I believe this is the most profitable opportunity ever in the crypto space.

Yes, that’s coming from a guy who bought bitcoin at $5.

Next Tuesday at 7 PM ET, Charlie will be holding a live event to discuss what he sees coming.

A quick question – why should you care what Charlie sees coming?

Well, he was one of Bitcoin’s earliest backers and today is considered one of the most influential people in cryptocurrencies.

He’s also advised and invested in more than two dozen digital currency companies, launched and managed numerous partnerships between crypto and non-crypto companies, and is the go-to guy for some of the world’s wealthiest entrepreneurs.

He’s been mentioned in Fortune… Forbes… CNN… 60 Minutes… TED Talks… Bloomberg… and The Wall Street Journal… to name a few. He personally knows many of the big players behind the tokens themselves. And yes, he’s a multi-millionaire from crypto.

***Circling back to Krugman, in one sense, he’s correct

Investors who don’t understand the inherent volatility of the crypto sector, along with its historical boom/bust cycles, can find it very hard on the nerves. And that’s when investors tend to make investment decisions that can result in losses.

That’s why it’s critical to prepare yourself today by better understanding both the good and bad of what could be coming.

Join Charlie next Tuesday to learn his forecast – the potential volatility, what a sector bear market might look like, the ensuing recovery, what types of cryptos could thrive, and far more. It’s a free event. Just click here to reserve your seat.

By the way, when you sign up for the event, you’ll get “Top 3 Ways to Cash in on the NFT Mania.” It’s a free, special report from Charlie and InvestorPlace’s other crypto expert, Luke Lango.

Bitcoin and the crypto sector are not the financial boogeymen that Krugman suggests. But as with any asset, the more you know before investing, the more likely you are to get the outcome you want.

If you want to know more about crypto, join us next Tuesday.

Buy the SoFi Stock Dip With Both Hands! 📉

The Top 5 Stocks Cathie Wood Is Buying This Week

SNOW Stock: Snowflake Could Have a Lot Further to Fall