It’s long been said that America has a love affair with cars, and it’s hard to argue the point.

In 2020, there were more registered vehicles in the United States than licensed drivers – 276 million to 228.2 million.

Cars occupy a prominent spot in American culture. There are songs like Mustang Sally (Wilson Picketts), Fun, Fun, Fun (The Beach Boys), Brand New Cadillac (Vince Taylor & His Playboys and then The Clash), and countless others.

Cars have even been important characters in movies and TV shows like Knight Rider (Pontiac Trans Am), The Dukes of Hazzard (Dodge Charger), Back to the Future (DeLorean), and dozens more. (And we can’t forget the Batmobile.)

While the era of true American muscle cars may have passed, there’s still something cool about sleek, fast cars and the power and freedom they symbolize. That’s why it was all over the news recently that Dodge will discontinue its iconic Charger and Challenger models after 2023.

In the unstoppable and massive electric vehicle (EV) megatrend, we may be seeing the end of cars with powerful engines, beefy tires, and a growl that any lion would kill for.

Then again, cool cars seem to be part of America’s DNA…

How to Buy Stage 2 Stocks for Recession Proof Cash

Have you ever heard of “Stage 2” stocks? According to Luke Lango, they’re the holy grail of investing because they could return as much as 500% in only 21 days and pay you an extra $10,000 or more in recession-proof cash every month. Details here.

Charging Up Power and Profits

As automakers around the world pour billions into researching and developing electric vehicles, they seem to realize the importance of keeping the “cool” factor. It looks as if the future will also have what we might call EMCs – electric muscle cars.

Dodge is already putting a ton of effort into replacing its iconic growlers and guzzlers with muscular EVs. The Dodge Charger Daytona SRT Concept was unveiled a couple of weeks ago, and CEO Tim Kuniskis says that it’s “gotta look like a Dodge, sound like a Dodge, and drive like a Dodge.”

The company is also going to great lengths to make it look and sound like a Dodge. EVs don’t need gears, so they don’t need to shift. Dodge is working on its “eRupt” transmission, which shifts like a traditional engine – including downshifting and “throwing shoulders into seatbacks in true Dodge style,” according to the company.

And then there’s the sound. Most EVs are practically silent. They sneak up on you like a cat stalking a mouse. Enter Dodge’s “Fratzonic Chambered Exhaust” – whatever that means. It involves an amplifier to produce the exhaust sound, and Dodge claims it can get up to 126 decibels. That’s louder than most rock concerts.

It will be interesting to see how successful Dodge is in these efforts, but it is far from the only company spending time and money to produce slick and powerful EVs. Tesla Inc. (TSLA) claims its Model S Plaid accelerates faster than any other car in production, blazing from 0 to 60 miles per hour in 1.99 seconds. That’s insane.

Rimac, located in Croatia, has the electric Nevera than can reportedly make that same 0-to-60 run in just 1.85 seconds. Porsche’s Taycan Turbo S does it in 2.6 seconds, and Ford Motor Co. (F) has an electric version of its Mustang that reaches 60 mph in 3.5 seconds.

The greatest challenge in producing EVs is also the biggest component – the battery. The race is on to produce batteries that are lighter, safer, and have a larger storage capacity so they don’t need to be charged as often.

It’s too early to pick a winner in the quest for better batteries, so to make money on this mega shift to EVS, Eric recommends investors look to the suppliers in what he calls the Second Electric Revolution…

I’m talking about the massive worldwide transition from combustion-based modes of power generation to renewable modes that feed an array of electric- and battery-based technologies.

Early in this trend’s development, we capitalized by investing in various solar energy stocks. As a group, these stocks performed brilliantly. And as they soared, we booked profits and established new positions to profit from a different facet of the Second Electric Revolution: energy storage.

That strategy has served us well so far.

The research firm Wood Mackenzie predicts the global energy storage market will skyrocket between now and 2030 – from a starting point of less than 15 gigawatt-hours to 741 GWh. 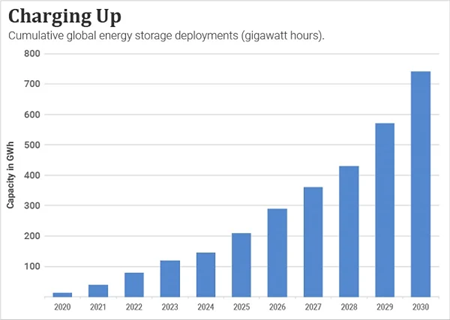 This booming rate of growth will rain down profits on a wide variety of companies. But as I’ve stated repeatedly, select base-metals companies may be the biggest beneficiaries of this new boom.

Let’s not forget that “energy storage” simply means “batteries,” like the lithium-ion batteries that power electric vehicles (EVs) down the road. Because EVs are essentially batteries on wheels, they contain vastly more copper and nickel than conventional internal combustion vehicles.

Day by day, these “metal hogs” are gaining in popularity and taking market share from traditional automobiles.

Every major car company on the planet is ramping up production of EVs. The world’s auto manufacturers will be producing more than 230 different EV models next year.

In 2018, the global EV market totaled about $40 billion. But according to Wintergreen Research, that number will soar 40-fold by 2025 to reach $1.5 trillion in annual sales.

We know the day will come when virtually every vehicle is battery-powered. We know some of the smartest minds in the world are working on breakthrough battery technologies to provide that power safely and efficiently.

It’s also nice to know that there should be plenty of EVs that are cool looking, fast, and fun to drive… at least until they start driving themselves. But that’s a whole other megatrend for a different day.

What’s crucial now is that, even in a struggling market, a bull market (as Eric mentioned on Thursday) is always around… even, and sometimes especially, when the mainstream market is beaten down.

This Second Electric Evolution may be something Eric’s had his eye on for a few years… but now, more than ever, is the time to act.

Stocks in this space are trading at a discount, and if the market has truly found its bottom, we could see a slow-burning explosion of these key tech stocks in the next few years.

We’ll keep an eye on this space as it progresses.