Get ready for a rangebound stock market.

That’s what our technical experts John Jagerson and Wade Hansen of Strategic Trader expect for the near future. Fortunately, they have advice for investors on how to play it.

Behind this gridlock is the loose balance of bullishness pushing stocks up and bearishness dragging prices down.

Three dynamics are supportive of stocks…

First, there’s this week’s rally. While it has been stop-and-go, the S&P is up 3.8% for the week as I write Friday early-afternoon. John and Wade see this as evidence that buyers are looking for good deals and that investors are not overly worried about another significant decline yet.

Second, the level where the market began its bounce was a positive. It happened to be at a critical support level for the S&P near 3,590. This shows there are still enough buyers out there to prevent a meaningful crash at the moment.

Third, John and Wade point toward earnings that are coming in better than many had feared.

Here they are with more:

As we have been saying for a few weeks, third-quarter earnings should be better than expected, and as long as consumers are still spending, the floor under stock prices should remain strong.

So far, that is the way earnings season is playing out.

On the other hand, there’s one very heavy bearish influence weighing on the market

Although things look positive so far, we still have to moderate our expectations; it is rare for a sustained bullish rally to begin with big reversals like last Thursday.

This tells us that investors are uncertain, and uncertainty is usually discounted into market prices.

The negatives weighing on the economy (inflation, rising interest rates, slowing global economy) are still severe enough to keep uncertainty high in the near term.

In our view, the positives and negatives are balanced enough at this point to keep the market stable but will also prevent any big bullish breakouts.

We expect the major indexes to remain channel bound in the short term.

If you’re looking to trade this channel-bound market, John and Wade see resistance at 3,800. But if the bulls muster the strength to push through this level, anticipate fierce selling pressure at 3,900 which should pause a rally, at least temporarily.

On the downside, we have significant support around 3,590.

The first big gamechanger for stocks will be tech earnings.

Tesla disappointed investors on Wednesday after the closing bell. The electric vehicle giant beat on earnings but missed on revenue. However, CEO Elon Musk was very upbeat:

I can’t emphasize enough we have excellent demand for Q4 and we expect to sell every car that we make for as far into the future as we can see. The factories are running at full speed and we’re delivering every car we make, and keeping operating margins strong.

It wasn’t enough for Wall Street. As I write, the stock is down about 5% since Wednesday’s close.

IBM did a better job of pleasing investors. The tech veteran beat on earnings, revenue, and it raised its full-year growth outlook. It’s up about 6% since the report.

But more weakness arrived yesterday. After the bell, Snap reported disappointing revenue on spending cuts from advertisers. The stock has collapsed 31%.

Back to John and Wade on what to look for:

We expect tech firms to sandbag (lower guidance, so next quarter is easier to beat) during their earnings calls.

We would expect companies to justly point at a strong dollar and ebbing international demand as the cause for slow growth rates this quarter, but whether they think those trends will continue will make the most difference to investor sentiment.

Speaking of the strength of the dollar, the U.S. Dollar Index sits at nearly 113, just a hair beneath the multi-decade high of about 114 it set a few weeks ago. 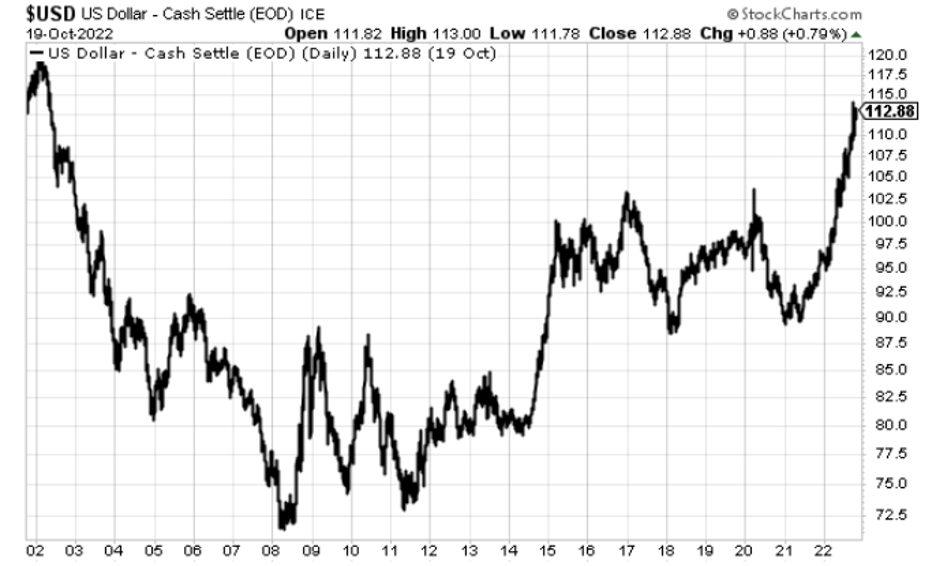 Right now, another rate hike on November 2nd appears to be a lock. But what’s unclear, leaving the door open to market fireworks, is Fed commentary.

Back to John and Wade:

We don’t know what the Fed chairman and other governors will say about the hike – and the pace of future hikes at that time.

FOMC members have been recently saying that there will be some debate about whether to continue hiking rates in 2023 at the same pace as in 2022. However, that was before the most recent CPI report, which exceeded expectations.

Therefore, many traders and analysts are worried that the Fed members may start taking on a more hawkish tone with less “debate,” which is bad for stocks.

But unexpected dovishness isn’t out of the question either.

In short, some Fed members want to slow the pace of rate-hikes, according to The Wall Street Journal:

Some officials have begun signaling their desire both to slow down the pace of increases soon and to stop raising rates early next year to see how their moves this year are slowing the economy. They want to reduce the risk of causing an unnecessarily sharp slowdown.

Others have said it is too soon for those discussions because high inflation is proving to be more persistent and broad.

You might not think that’s exceptionally dovish, but if we look at the CME Group’s FedWatch Tool, yesterday, traders were putting the probability for a 75 basis-point hike in November at 99.9%.

If markets are finally priced for a hawkish Fed, yet the Fed doesn’t come in quite as hawkish, an explosive rally could start.

We shouldn’t bet on this happening – especially not in November. But as the WSJ points out, we’re starting to see some calls for a more measured approach to rate hikes.

However, for now, for every budding dove, there’s a well-entrenched hawk. On that note, here’s Minneapolis Fed President Neel Kashkari from Tuesday:

If we don’t see progress in underlying inflation, or core inflation, I don’t see why I would advocate stopping at 4.5, or 4.75, or something like that.

As for John and Wade, they believe the Fed will remain consistent with recent signaling. But this is likely the most significant wild card for the market today.

In our view, the negatives and positives in the market are roughly balanced.

Traders usually like clear black-and-white answers, so this can be uncomfortable. If the wild swings in the market are making you feel a little frustrated, you are normal.

We plan to continue using strategies that do well in a channeling market. That means selling calls at resistance levels and buying them back or writing short puts on the lows.

Are you curious about calls, puts, and the strategies that John and Wade use to generate cash in a channeling market?

We have you covered.

To help take the mystery and misconceptions out of options, InvestorPlace has created a fantastic, free report that pulls back the curtain on all the important details.

It clearly explains what options are, the various types of options available to investors, the pros and the cons of using them, examples to drive everything home, even how to open an options account so you can start trading.

Best of all, it’s totally free!

You can check it out right here, no strings attached.

And to learn more about trading options alongside John and Wade in Strategic Trader, click here.

In the meantime, we’ll keep you updated on the latest from tech earnings and the Fed here in the Digest.

The 7 Best Fidelity Funds for Retirees