Are investors analyzing rate hikes the wrong way? … what history shows us about how high rates need to go … how to prepare your portfolio

Our credibility is on the line.

I do think we need to front-load more of our planned removal of accommodation than we would have previously.

We’ve been surprised to the upside on inflation. This is a lot of inflation.

So, does that mean a half-point raise in March?

Perhaps then another half-point later in the summer?

What will it mean for stocks?

Understandably, most investors are looking at the upcoming period of rate hikes through the perspective of “how will hikes impact my portfolio?”

That’s obviously a pressing issue and one we should examine.

However, fewer investors seem to be grappling with rate hikes through the perspective of “how high do rates have to go in order to bring inflation under control? And based on that rate, what will it mean for my stocks?”

The first perspective asks something like, “how will a rate hike of, say, three-quarters of a point by late-summer impact my stocks?”

The second perspective asks, “If the Fed Funds rate has to climb to, say, 8% over the coming quarters/years to snuff out inflation, what will that mean for my stocks?”

Nearly all of what I’m reading today is focused on the first question. But investors would be wise to at least consider the second, as horrifying as it might be.

So, what’s the answer?

***Using past historical data as precedent

I don’t know how high the Fed Funds Rate will have to go to squelch inflation.

But I do know that historical data can be used to give us an informed perspective on the answer.

Below, we’re going to look at a chart that compares the Federal Funds Effective Rate (in blue) with the Consumer Price Index (in red).

Now, as you look at the chart, the first thing I’d ask you to notice is how the Fed Funds rate in blue tracks the inflation rate in red pretty closely.

Now, look at the chart again. This time, notice that when inflation (again, in red) spikes, the Fed Funds rate (in blue) has had to climb above the CPI spike in order to rein it in.

Finally, look at the far right of the chart to where we are today.

As you know, the latest data show the CPI at 7.5%. Meanwhile, the Fed Funds rate is at 0%. In other words, these two lines, which typically move in tandem, are completely decoupled.

If, historically, the Fed Funds rate and the CPI tend to move together…

And if, historically, the Fed Funds rate has to be set higher than the CPI in order to rein in inflation…

Then why are we talking about the Fed Funds rate climbing only to 1.5% or so?

Instead, why is there no mention of a longer rate hike cycle that puts rates at 8% or so – obviously, that wouldn’t happen immediately, or even in 2022. But looking at history, why is this not even being discussed?

One reason we’re not having this conversation is because of the belief that supply chain problems will sort themselves out, and that will resolve much of the supply/demand imbalance that’s exacerbating inflation.

I think this is valid. The resolution of supply chain kinks will help inflation substantially. But how much of today’s inflation is due exclusively to supply chains?

Proponents of “supply chains are the sole problem” ignore the tidal wave of dollars that have flooded the U.S. economy over the last two years. Almost a fifth of all U.S. Dollars ever created were created in 2020. Those dollars will still be washing around long after supply chain problems resolve.

And to people who don’t see this as an issue, here’s a perspective…

Supply chain disruptions are a global problem, right? So, why then, doesn’t the entire world have the same “7.5% CPI” inflation problem as the U.S?

Actually, let’s narrow it down. Let’s look at Western European countries since they’re most similar to the U.S.

If they’re suffering from the same supply chain problems that we are, where is their inflation clocking in?

The European Commission on Thursday raised its inflation expectations for this year, but is still expecting prices to move below the European Central Bank’s target of 2% in 2023.

The Brussels-based institution said inflation will hit 3.5% this year from a November forecast of 2.2%.

Yes, Europe has inflation, but no, it’s not nearly as high as it is here in the U.S.

Through this lens, it seems we can’t blame supply chains exclusively for our inflation problem. So, we can’t expect the resolution of supply chain problems to save the day.

Nevertheless, let’s assume that supply chain issues resolve in late 2022. And let’s say that this fixes a huge part of the problem and cuts the inflation rate in half.

Based on the latest CPI data, we’d still be looking at a CPI of 3.75%. History suggests we’d need the Fed Funds rate to climb to at least that level if we want to tamp down such inflation.

Right now, no one is talking about a Fed Funds rate at 3.75%. Should we not even consider that?

The Fed’s biggest goal in 2021 was to get employment back to pre-pandemic levels.

Well, pre-pandemic, the unemployment rate hit a low of 3.5%. Today, we’re at 4% yet it’s beginning to tick higher after many months of progress (in December it was 3.9%, in January it climbed to 4%).

I could be wrong, but it appears likely we’re not going to see any further meaningful (or sustained) drop in the unemployment rate at this point.

Meanwhile, rising rates threaten to impact small businesses in a negative way. If higher rates result in some layoffs, causing the unemployment rate to head substantially north, it’s reasonable to believe the Fed may ease up on rate hikes.

Obviously, inflation would continue to burn through consumer pocketbooks in this scenario. Nevertheless, some investors see this as a reason why rate hikes will be capped.

This is possible. But with Fed presidents like James Bullard growing very hawkish, will the Fed allow rampant inflation even if unemployment ticks up slightly?

That’s what we’ll have to watch.

Moving on, the third reason why many investors aren’t considering much higher interest rates is what I believe is the most likely explanation…

***We can’t handle significantly higher rates, so we don’t want to talk about them

The U.S. government is now indebted to the tune of $30 trillion. That’s astronomical.

Paying debt service on $30 trillion when rates are climbing rapidly would be an enormous challenge for the government (get ready for higher taxes).

And it’s not just the government. Last week, we learned that consumer debt hit $15.6 trillion in 2021. That’s a record.

During 2021 alone, consumers added a whopping $1 trillion to their debt levels. This annual gain was the largest ever in records that go back to 2003. To be fair, much of this was mortgage debt which is fixed for most home buyers.

That said, neither our government, nor our consumers, are in great shape to handle significantly-elevated interest rates. And so, many investors are simply discounting this as a possibility.

The mindset is basically, “nope, rates can’t go all that high because our entire financial system would simply blow up, so the Fed won’t allow that.”

I understand that response, and I agree that the Fed is desperate for this not to happen. But something is going to happen. Actions have consequences, whether we like them or not.

In this case, if the Fed decides not to follow history and jack up the Fed Funds Rate to a level commensurate with inflation because the outcome would be too horrible to imagine, then what will happen?

Well, a logical hypothesis is that inflation will continue to eat up pocketbooks everywhere.

And what happens then?

From an investment perspective, certain stocks do great (mostly from companies that can pass along inflationary cost increases to consumers), while other stocks will do poorly.

From a societal perspective, lower- and fixed-income individuals will be hurt far more than wealthier individuals, which will add to the cultural division that’s gripping our nation today (this has echoes of Eric Fry’s research on The Technochasm).

There are other ripple effects we won’t get into here, but overall, sustained, high inflation would be very destabilizing.

***Stop depressing us, Jeff, what’s the answer from an investing perspective?

First, be careful about holding cash for too long.

Yes, you need dry powder in case a market selloff presents great buying opportunities, but sitting on a wad of cash indefinitely when the CPI is at 7.5% is guaranteed to kneecap your buying power.

Second, it’s a certainty that rates are headed higher. But as we’ve noted in past Digests, a rising rate environment is actually good for stocks for a while.

So, high-quality stocks that have pricing control will do well. Also, expose your portfolio to commodities and hard assets like real estate. There are also softer commodities like coffee (last week, coffee futures hit the highest level in ten years).

Third, let’s say inflation doesn’t ebb as we all hope. So, Powell – unwilling to go down in the history books as the Fed chairman that allowed “The 1970s Part II” – follows historical precedent and jacks up rates in a way that more closely mirrors the CPI, as has happened in the past.

In that case, the market will be in for a major drop because too few people are truly considering this as a real possibility. Here, your best bet are hedges.

As an example, last fall, Eric Fry highlighted the ProShares Short High Yield (SJB). This is an ETF that uses interest rate derivatives to bet that high-yield bond prices will fall (as interest rates rise). 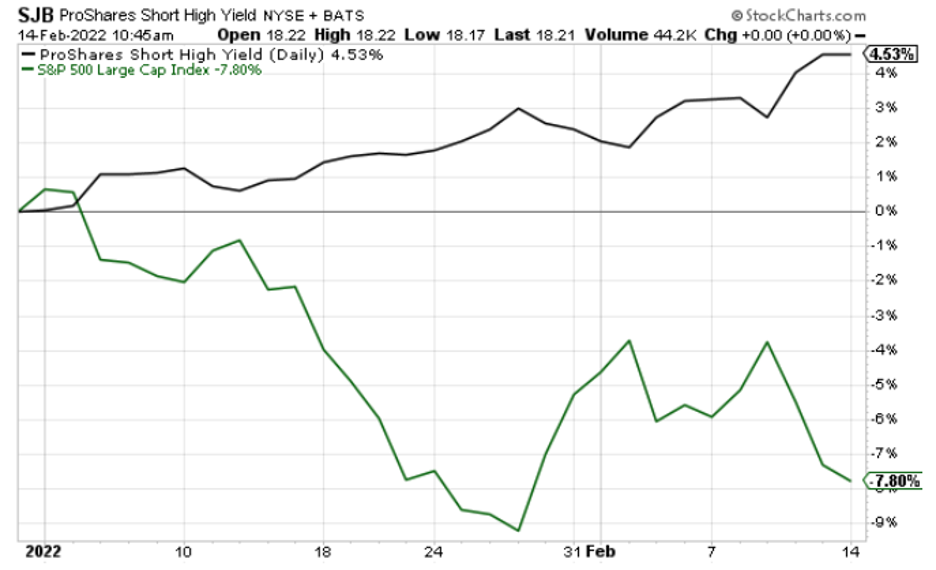 Finally, you don’t have to buy into just one of these potential courses of action.

You can hold some cash, some great stocks, commodities, and real estate, as well as some hedges. In fact, that’s what diversification and portfolio balance are all about.

Of course, the right mix will be relative to you, your specific financial situation, and how comfortable you are with market volatility.

***Coming full circle, we’d all be wise to grapple with “what happens if rates go much higher than expected?”

After all, history shows us that the Fed Funds Rate has had to top the CPI to get it under control. Should we expect now to be different?

It might be – I certainly hope it will be. But having a plan ready if that’s not the case is a wise move.

Who Is Cryptoqueen Ruja Ignatova?

3 Tech Stocks That Could Take Off in Q2