Here’s his forecast for what to expect from the Fed as we wind up 2022 and move into next year, as detailed in yesterday’s Accelerated Profits Flash Update podcast:

The Fed never fights market rates. So, they will be raising key interest rates 75-basis-points on September 21st.

Then they’re going to pause in November, because the November Fed meeting is six days before the November elections and they’re already getting political criticism from people like Senator Warren from Massachusetts.

And then, if they have to fine-tune rates, they’ll do it in December because we’ll be busy and engrossed in the holidays, and no one pays attention…

I don’t anticipate any rate-hikes next year in 2023. The Fed wants to wrap it up and get it done now.

While many investors were hoping for hints of a “Fed pivot,” Powell reiterated the Fed’s willingness to raise rates high enough to kill inflation, even if it brings “some pain to households and businesses.” He called this pain “the unfortunate costs of reducing inflation.”

In response, the market immediately adjusted its expectations for coming Fed rate-hikes.

We can see this by looking at the CME Group’s FedWatch tool. This shows us the probabilities that traders are assigning to different fed funds rates at various dates in the future.

As you can see below, as I write on Tuesday, the market puts a 76.5% probability on a Fed hike of 75-basis-points in September.

As Louis noted in his podcast, “the Fed never fights market rates.” Well, 75-basis-points is what the market is expecting. We can also see higher rate expectations in the 10-year Treasury yield, which we’ll get to in a moment.

First, as to the political criticism that Louis references, here’s Fox Business:

During an appearance on CNN’s “State of the Union,” [Senator Elizabeth] Warren said she’s concerned that the Fed’s continued raising of interest rates could “tip” the country into a recession.

“I am very worried about this, because the causes of inflation, things like the fact that COVID is still shutting down parts of the economy around the world, that we still have supply chain kinks, that we still have a war going on in Ukraine that drives up the cost of energy and that we still have these giant corporations that are engaging in price gouging,” she said.

Warren went on to say “Do you know what’s worse than high prices and a strong economy? It’s high prices and millions of people out of work. I’m very worried that the Fed is going to tip this economy into recession.”

Due to this type of political pressure, Louis believes the Fed will pause rate-hikes November. It doesn’t want to be on the receiving end of accusations that its actions influenced the November election.

One number to keep your eye on

Regular Digest readers know that Louis is a “quant.” In other words, he lets cold, impartial market data influence his investment decisions rather than hunches or gut feel.

There’s one piece of data that Louis is watching especially closely right now – the yield on the 10-year Treasury bond.

For newer Digest readers, the 10-year Treasury yield is one of the most important numbers in the world. That’s because all sorts of global interest rates are informally pegged to this yield – many of which affect you personally.

For example, the 30-year fixed mortgage rate usually rises and falls alongside the 10-year Treasury yield. You can see this in the chart below.

You’re looking at the one-year “percentage change” performance of the 30-year fixed mortgage rate in black and the 10-year Treasury yield in green.

We’re using percentage change because it makes it easier to see the parallel relationship between the mortgage rate and the treasury yield. 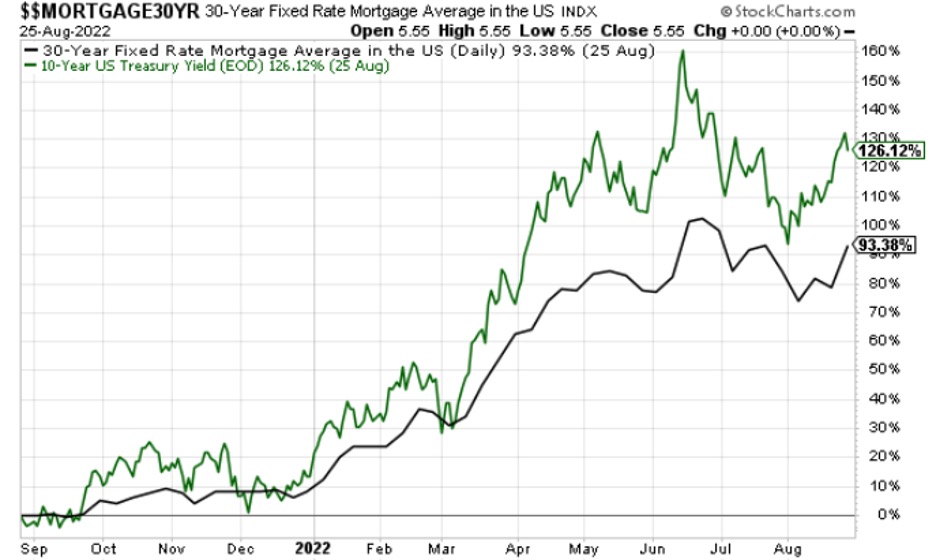 The 10-year Treasury yield is already incredibly influential on your portfolio, because the higher the 10-year yield goes, often, the greater the bearish pressure on the market.

This is for two reasons…

One, if investors can get, call it, 3% from a “risk free” loan to the U.S. government, they might pull money out of the “riskier” stock market. That leads to lower stock prices.

The current situation is especially interesting because the 10-year finds itself in the crosshairs of two conflicting pressures.

Back to Louis for the details:

[Meanwhile,] because we have a strong dollar, and because we have higher rates than other countries like China, Japan, Britain, and the EU, foreign capital continues to pour in, chasing our yields, putting downward pressure on them.

To make sure we’re all on the same page, as of June 1, the Fed began shrinking its $8.9 trillion balance sheet at a pace of $47.5 billion per month, with the expectation that number will double to $95 billion in September.

Without the Fed purchasing enormous quantities of bonds, that reduces demand, which reduces prices. Since bond prices and yields move inversely, this pushes up yields.

But as Louis points out, we have significant international demand for U.S. bonds due to favorable relative rates. And that buying drives up prices, which pushes down the yield.

This is the push/pull dynamic happening today. Keep your eyes on it – a breakout in the 10-year yield would mean pressure on stocks.

So, in this environment, which sectors do investors want to be as we move toward the end of the year?

Commodity stocks remain your best bet: energy, food, fertilizer, anything involved with the transportation of commodities. Those are your best bets.

There are some semiconductor equipment companies that look very good. You’ve probably heard about all the onshoring of semis, and how manufacturing of semis is going to be moving. It’s not always going to be in Taiwan or China.

Again, let’s flesh this out a bit more.

You might be wondering about investing in energy today. After all, crude oil prices have come down over the summer and seasonality usually means even lower prices in the fall.

Post-Labor-Day, energy demand usually drops. But Europe is so screwed up right now with the demand for natural gas and crude oil – and we’re so eager to supply them – that I think energy prices are going to remain elevated.

Energy stocks are going to have the best earnings for the next two quarters.

I will add that crude prices have been rising steadily since mid-August. Yesterday, the price of West Texas Intermediate Crude nearly topped $97 after falling to roughly $86 earlier this month. Prices are down as I write on Tuesday due to renewed fears of a recession.

As to semiconductors, the sector has been under pressure so far this year. But last Thursday, President Biden signed an executive order reinforcing the implementation of the recently passed CHIPS and Science Act.

This bill sets aside $280 billion to boost domestic semiconductor production and technology research.

If you’re looking for the stocks most likely to benefit from this bill, give a look toward Intel, Micron and GlobalFoundries.

Finally, where does the market go in the next handful of weeks?

First, Louis sees the market reversing this week, thanks to Labor Day:

But beyond that, Louis believes the market will get another boost after the Fed’s September meeting:

If I had to pick a day to buy, if you have new money to put in the market, it would be September 21st.

I’m expecting a dovish FOMC statement still. I’m probably in the minority on that right now.

To be clear, Louis’ forecast doesn’t apply to the entire market. In fact, he calls today’s environment “every stock for itself.”

So, the stocks he sees outperforming are those with superior fundamentals, which points us back to the sectors we just identified a moment ago.

We’ll keep you updated on all of this here in the Digest. In the meantime, keep an eye on that 10-year Treasury yield. It will be a key driver of stock prices in the coming weeks.

Which Way Will Gold Break?

DAL, AAL, UAL: Why Are Airline Stocks Down Today?

Market Recap – Where to Find Strength in the Market