California based technology conglomerate Alphabet (NASDAQ:GOOG, NASDAQ:GOOGL) is arguably one of the most powerful companies in the world. GOOGL stock performance reflects the longstanding global supremacy of the business. At the time of writing, the stock has returned -7% year to date (YTD), but 30% in the last 12 months (LTM), and 218% for the last five years. GOOGL stock has been publicly listed on the New York Stock Exchange (NYSE) since 2004.

Peter Thiel — a PayPal (NASDAQ:PYPL) co-founder — sits at the intersection of technology and venture capital. Thiel states that companies that benefit from a monopolistic environment will either somewhat deny it or claim to earn their revenue from a more competitive revenue stream. They will claim they’re dominant over a crossing of several markets.

Not surprisingly, Google is one such company.

Its latest quarterly earnings report revealed $75 billion in revenue. The blue-chip giant has generated $258 billion in total for financial year (FY) 2021, its best year ever. Net income for FY 2021 was $76 billion, almost a 90% increase from the year prior. Operating margin – which is relatively higher in the tech industry — was 29% for Google in the latest quarter.

Google has been focusing on — and investing in — artificial intelligence. The company has been hiring aggressively and investing into research and development. CEO Sundar Pichai, has stated that “new AI models are helping to create information experiences that are truly conversational, multimodal, and personal.” The company achieves these experiences through multiple products and services.

YouTube shorts has been a booming segment for Google. YouTube shorts has led to a vast increase in the number of content creators. Accounts that have generated $10,000 and more in revenue, have increased by 40% year-over-year (YoY). YouTube subscriptions are estimated to reach $18 billion in revenue by 2025, a massive jump from the $5 billion in 20220.

Q4 2021, marked the best-selling ever quarter in Pixel mobile phones, despite global supply chain challenges. Cloud also grew by 45% YoY and strong partnerships with companies like Shopify (NYSE:SHOP) have been instrumental for the division growth.

“Other bets” projects such Waymo autonomous self-driving cars and Verily Life Sciences could play a significant role in the future evolution of Google. Waymo’s long-term valuation was estimated to be worth around $125 billion back in 2019, yet the autonomous vehicles expectations have been lowered recently.

Google has a diversified portfolio of products and services. The table below illustrates the various GOOGL stock revenue streams, by percentage, based on the latest earnings report.

Google is also geographically diversified. Last year’s revenue, in millions of dollars, broke down like this:

At the end of FY 2021, GOOGL stock held $139 billion in cash, cash equivalent or marketable securities. The company has around $15 billion in long term debt, and a debt-to-equity ratio of 11.3%, a showcase of excellent financial condition. For the last five years, GOOGL stock has consistently outperformed the index.

Google announced a stock split that will take place in July, it is expected that the split will increase liquidity and boost retail trading. The stock will also be added in the Dow Jones Industrial Average Index (DJIA).

Market volatility index (VIX) is currently at 31.3, significantly higher than the 30-year average which is around 19.5. Bill Ackman defines the holy grail of a stock as a business that is free cash flow generative, dominant, with great management and high entry barriers. GOOGL stock is essentially the definition of the aforementioned. 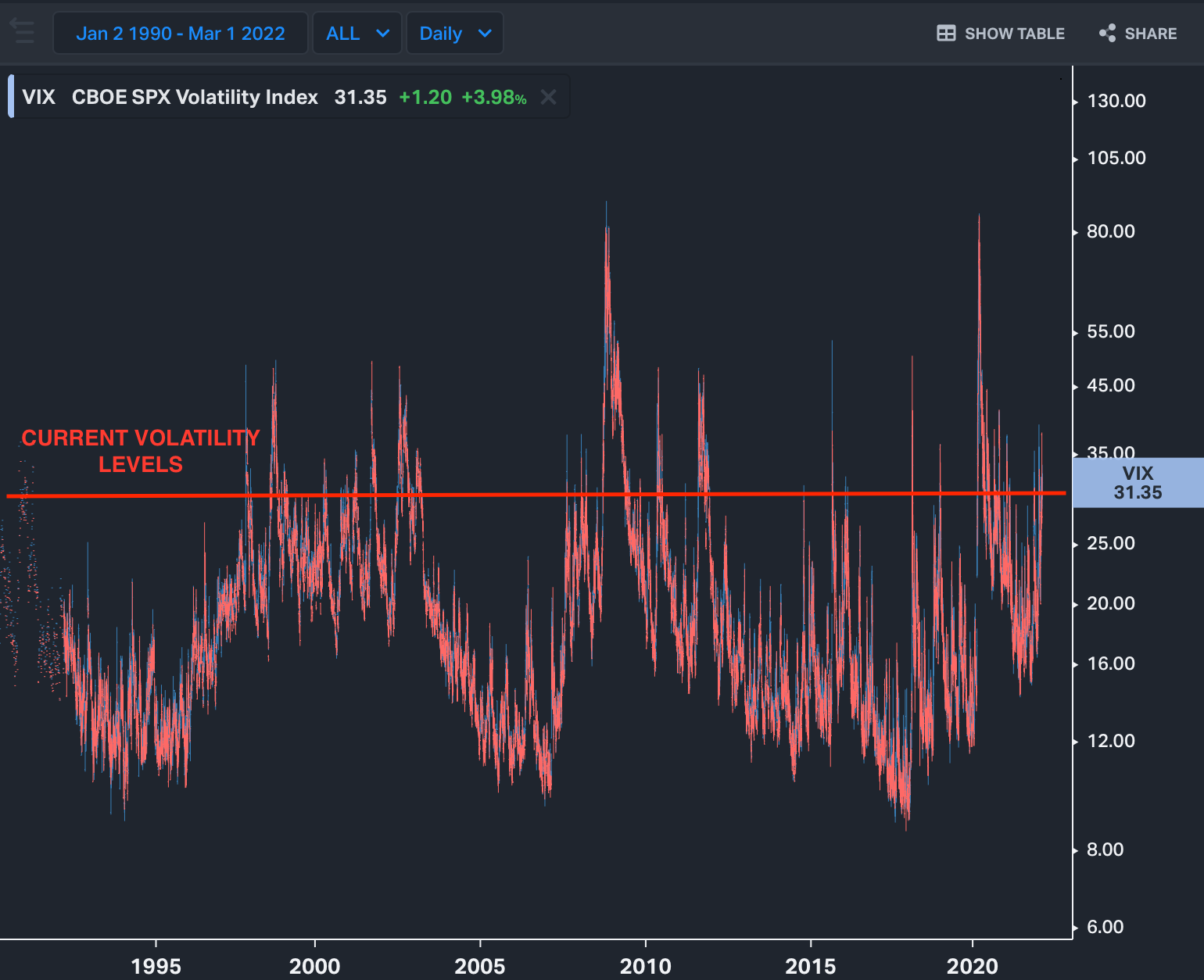 The S&P 500 Index is 8% down year-to-date, and the Nasdaq 100 Index is down 13%. Declining markets, political tensions, inflation, debt levels and global uncertainty are pushing GOOGL stock towards the “undervalued” territory. Nevertheless, the financials of the company and the outlook of the business are solid.

I do not see any reasons as to why growth rate, margins and terminal value will decrease anytime soon. I anticipate GOOGL stock to modestly maintain $112 earnings per share and grow 15% for the next five years and 10% for the subsequent five years with a 10% discount rate and a terminal multiple of 25. If the stock grows faster than this , then the stock can be considered as significantly undervalued with a 40% upside potential in the next 12 months.

On the date of publication, Jonathan Tang held a LONG position in GOOGL stock. The opinions expressed in this article are those of the writer, subject to the InvestorPlace.com Publishing Guidelines.

Jonathan Tang has gained extensive experience in the financial services industry in London. He has completed valuable projects for companies such as Bloomberg, London Stock Exchange Group and FactSet. He holds a master’s degree in Investment & Risk Finance and has completed an MBA course at the London School of Economics. Jonathan has a passion for fintechs that democratize investing, stock market and public equities, ETFs, start-ups and real estate.

Why Growth Stocks Are Setting Up for a MASSIVE 2022

Can You Invest in Uranium? 3 Stocks to Consider