It’s been a busy week in the market with the movement in bond yields, the resignation of Liz Truss as Britain’s prime minister, and a slew of earnings reports from big companies. Underpinning all of these important events was increased talk of recession.

Some folks now say one is much guaranteed.

That was the word from Bloomberg economists Anna Wong and Eliza Winger, who upped their odds of a recession by next October to 100%. I give them credit for their decisiveness.

Joining the recession chorus was The Wall Street Journal, whose survey of economists put the odds of a recession in the next 12 months at 63%. Those odds aren’t nearly as high as Bloomberg’s, but they are considerably higher than the last survey in July in which the odds were 49%.

And Goldman Sachs Group (GS) CEO David Solomon said there’s a “good chance” we will have a recession. By the way, his comments came early Tuesday right after Goldman beat expectations in its third-quarter report. Earnings still work, and the stock is up 4% this week, double the S&P 500.

This threat of a recession is nothing new, and it really shouldn’t surprise anybody. That’s been the biggest risk of the Federal Reserve raising key interest rates to kill inflation. If the economy slows too much, we go into a recession.

In fact, we’ve already experienced a recession according to the generally accepted definition, which is two consecutive quarters of a shrinking economy. We had that in the first two quarters of the year when the economy contracted at annual rates of -1.6% and -0.6%. 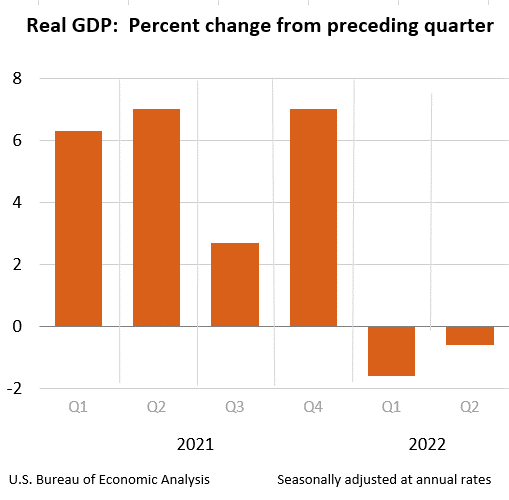 But it wasn’t an “official” recession because that call comes from the National Bureau of Economic Research (NEBR), which does consider other factors. But here’s the deal: NEBR uses trailing data, recessions can only be declared looking in the rearview mirror. By the time a recession is official, both the economy and the stock market may have already been through the worst of it and could even be turning around.

We can look back two years for a great example of this. The NEBR declared that the pandemic-induced recession lasted from February to April in 2020. Well, they made that announcement on July 19, 2021… more than a year after the fact. Anyone waiting for official word to get back into the stock market missed one heck of a rally. 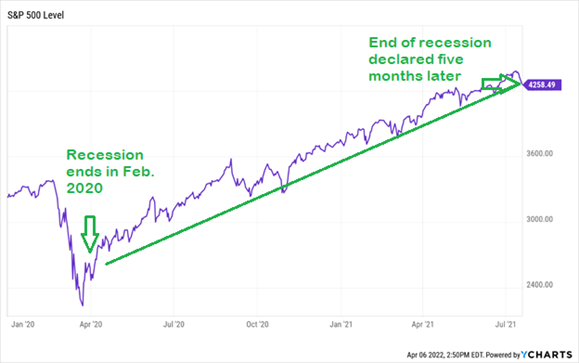 Stocks will remain volatile, but given what’s happened this year, I think the market has already priced in the possibility of a mild recession to a large extent. And I do think any recession would be mild, as jobs, consumer spending, and earnings are all hanging in there so far.

Here’s the other thing to keep in mind: Stocks can actually go up during recessions. In fact, they often do. The market looks forward, so as we just saw in 2020, stocks often turn higher even as a recession is ongoing. This chart from Hartford Funds shows that stocks gained during seven of the 13 recessions since 1945. 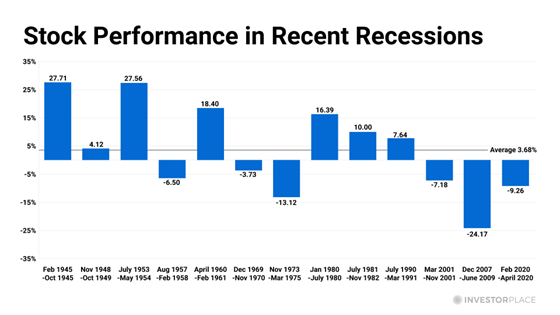 So, we have to be careful out there, but that does not mean going into hibernation. You want to take advantage of these discounted prices to invest in companies that have strong sales and earnings. Strong growth is harder to find in a slow or shrinking economy, but it’s still out there, and these stocks become an oasis when profits are drying up elsewhere.

In a slow economy, the stock market also narrows. It is not a rising tide lifting all boats, which we often see in bull markets. Instead, it becomes every stock for itself. When investors do put their money to work, they turn to these fundamentally superior stocks.

At the end of the day, profits drive stocks higher, and that’s why I focus so closely on earnings, sales, profit margins, analysts’ expectations, and what stocks institutions are buying. These (and a few other factors) are the cornerstones of my system that has worked so well for decades. (You can try it out and see how your stocks rate at PortfolioGrader.com.)

In fact, stocks on our Accelerated Profits Buy List are characterized by 60.6% forecasted sales growth and 341.1% forecasted earnings growth, which is amazing.

If you’re wondering where to look, the best opportunities remain in the energy patch, thanks to their strong fundamentals. That’s why I have recommended several energy stocks lately. If you’d like to learn more about their names and the full details before they report earnings, click here.