When it comes to stocks to buy with enormous long-term upside potential, few look more compelling than QuantumScape (NYSE:QS) stock.

As the leading solid-state battery maker, QS is developing a new generation of batteries. These next-gen batteries will enable electric vehicles to drive thousands of miles on a single charge. What’s more, QuantumScape’s breakthrough could allow for fast-charging (in mere minutes). Most exciting of all? It’s a “forever battery.”

Electric vehicles are the future of transportation. That’s a foregone conclusion. Your average electric car only gets about 250 miles of driving range today. For that, it takes upward of an hour to fully charge. Each of these things make it implausible for EVs to replace gas cars.

We need a new solution.

And QuantumScape is making that solution.

While everyone is so hyped up about the EV Revolution, the plain truth is that it won’t go mainstream until we make better batteries.

To understand why, we need to take a quick trip back to chemistry class…

Batteries comprise three things: a cathode, an anode, and an electrolyte. Batteries work by promoting the flow of ions between the cathode and anode through the electrolyte.

Conventional lithium-ion batteries are built on liquid battery chemistry. That is, they comprise a solid cathode and anode. Connecting the two is a liquid electrolyte solution.

These batteries have worked wonders for years. But due to the constraints of liquid electrolytes, they’ve reached their energy cell density limit. So if we want our phones, watches, and electric cars to last longer and charge faster, we need a battery unlike any we’ve seen before.

With solid-state batteries, the name pretty much says it all. Take the liquid electrolyte solution in conventional batteries. Compress it into a solid. Create a small, hyper-compact solid battery. And because it has zero wasted space, this battery lasts far longer and charges far faster.

Of course, the implications of solid-state battery chemistry are huge.

Solid-state batteries could be the key to making our phones sustain power for days. They could enable our smartwatches to fully charge in seconds! And, yes, SSBs can allow electric cars to drive for thousands of miles without a recharge.

That’s why they’re dubbed as “forever batteries” by insiders. It is critical technology that can propel the EV Revolution into its next phase: supercharged growth.

QuantumScape Has Figured Out the Impossible

But, up until recently, making solid-state batteries was the stuff of science fiction. The science was just too prohibitively complex.

Then, along came a team of genius Stanford professors and scientists, and a few tech execs. With backing from some the most prestigious venture capital firms in the world, they started a QuantumScape in 2010.

The biggest issue with solid-state batteries is something called “dendrites.” Dendrites are small cracks that form in the solid electrolyte during charging and recharging. Eventually, they get so big that they short-circuit the battery.

The big breakthrough in solid-state batteries, thus, lies in developing a solid electrolyte material that is dendrite-resistant.

About a year ago, QuantumScape did just that on a very tiny scale, with a single-layer battery cell. Sure, a single-layer battery cell is far from enough to power a car. But, since then, the company has proven that its proprietary, breakthrough solid-state battery technology works in 4-layer and 10-layer cells, and is showing early promising signs of working in 16-layer cells, too.

In other words, QuantumScape’s initial “tiny” solid-state battery breakthrough is proving to work even as the company scales up the battery size.

If this trend continues, then within a few years, QuantumScape will be commercializing effective solid-state batteries that are big enough to be used in cars.

The battery of the future will arrive – and QuantumScape will be the company making and selling that battery.

If that happens, the potential upside in QuantumScape stock is enormous.

By 2030, we estimate that around 75 million new passenger cars will be sold globally. We believe about half of those cars will be EVs. Of those EVs, we think around 10% will be outfitted with solid-state batteries. Assuming QuantumScape nabs about half of the solid-state battery market in EVs, and sells those batteries for around $7,000 a pop, the company could be looking at over $13 billion in revenues by 2030.

Assuming target 25% operating margins and a 20% tax rate, that implies potential 2030 profits of about $2.6 billion. A 20X price-to-earnings multiple on that implies a potential future valuation for QuantumScape of $55 BILLION – which is up nearly 10X from the current market cap. 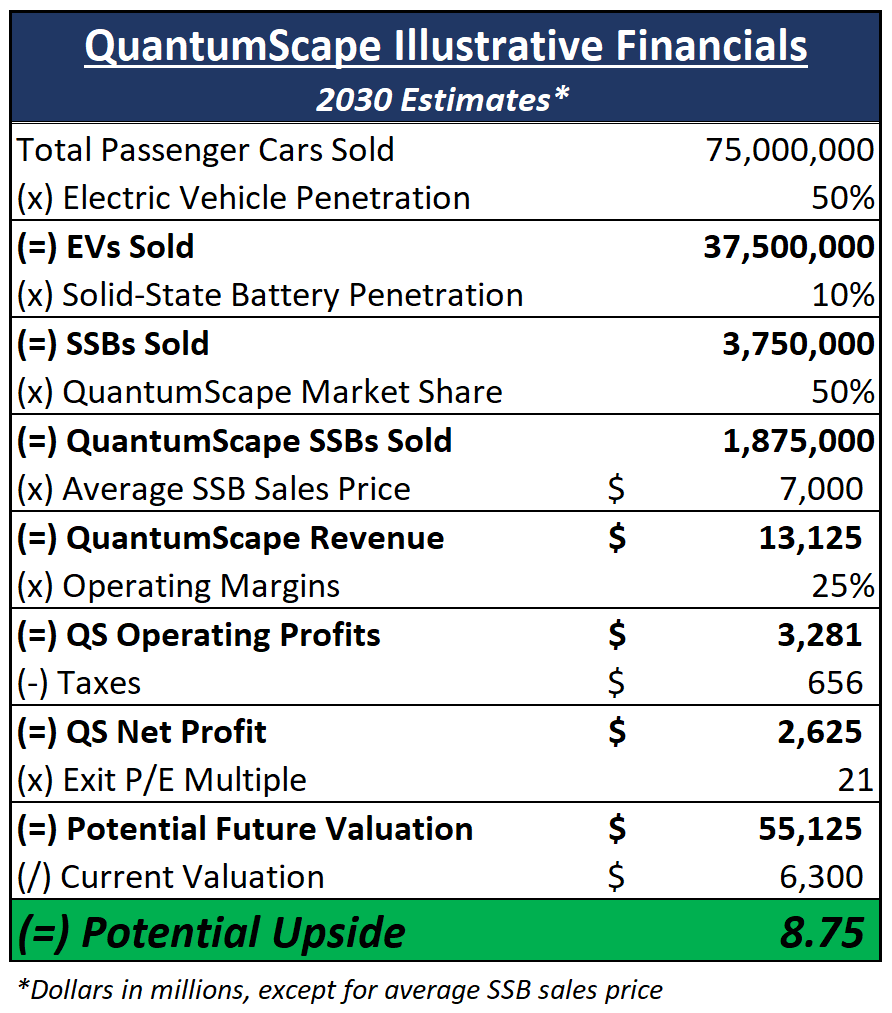 That’s impressive. So, if you’re looking to buy and hold a growth stock that could make you really rich, QuantumScape stock should be at the top of your list.

Solid-state batteries are the future, and they represent one of the most promising technological breakthroughs of the 2020s.

Most people think of solid-state batteries as driving forward the EV Revolution. And they will, but they’re about so much more than that. Pretty much everything you use every day — your electric vehicle, your smartphone, and your laptop – are all built on lithium-ion batteries. The solid-state battery will revolutionize all of those devices, not just EVs.
This is a multi-TRILLION-dollar revolution in the making.

Some of the stock market’s biggest winners in the 2020s will be solid-state battery makers.

QuantumScape projects as one of those mega-winners. But it won’t be alone, and in fact, it may not even be the biggest winner…

Rather, that title is reserved for a tiny, completely unheard-of solid state battery maker whose stock is trading for less than $3 right now.

Less than $3… and this company could potentially change the world over the next decade.

Needless to say, the upside potential in this tiny stock is enormous – so big, in fact, that unlike QuantumScape, I can’t write its name in this post.

But, I did just give a presentation at the landmark Hudson Theater in Southern California, where I told a group of 60 people all about this tiny tech stock.

And right now, I’m going to pull back the curtains on that event, and give you a front-row seat to learning about the small, $3 stock at the epicenter of the biggest technological revolution of our lifetimes.

On the date of publication, Luke Lango did not have (either directly or indirectly) any positions in the securities mentioned in this article.

What Is Going on With Beyond Meat (BYND) Stock?

Is the Oil Trade Done?