Paddy Doherty’s father was in his 60s when he began getting breathless on walks.

Doctors believed it was angina, but two years later when Doherty’s father died of a heart attack, the real culprit was identified – a rare disease called transthyretin (ATTR) amyloidosis.

About a year ago, Doherty, now 65, began experiencing the same breathing problems his father suffered. He began feeling winded walking up hills around his home.

Testing revealed Doherty did, in fact, have a heredity form of ATTR amyloidosis. It appeared Doherty faced the same grim outcome as his father.

This groundbreaking treatment had the potential to cure ATTR amyloidosis with just a single dose.

Here’s Paddy Doherty with the outcome:

I had no side effects and left the facility after two days.

The walk that I felt breathless on, which is a steep kind of mountain walk through a forest, I’m doing that every Sunday now.

We are finally at the point where genomics — the branch of molecular biology concerned with the structure, function, evolution, and mapping of genomes — is ready to change the world…

Artificial intelligence is converging with decades of breakthrough genomics research to create a new generation of hyper-efficient, hyper-accurate, and hyper-precise gene-editing medicines.

Those medicines are going through clinical trials today, and the first will likely be in-market within the next few years.

At scale, gene editing has the potential to cure disease, fix genetic disorders, improve food quality, alleviate resource depletion, and so much more.

Gene editing will, quite literally, change everything because, after all, it enables us to change DNA. And every living thing in this world is built on DNA.

It goes without saying, then, that this is the breakthrough of a century.

In today’s Digest, we’re going to look at a small biotech company on the forefront of the genomic revolution.

Luke just highlighted this company to his Daily 10X Stock Report subscribers, calling it “a uniquely positioned player in this revolution that has extremely high upside potential from current levels.”

In addition to its potential for groundbreaking genomic-based cures, this company’s stock is trading near multi-year lows, as the entire biotech sector has been destroyed over the last 12 months.

Lots to cover. Let’s jump in.

***The enormous upside potential of this genomic leader

For newer Digest readers, Luke is the analyst behind The Daily 10X, as we call it. His specialty is finding market-leading tech innovators that are pioneering explosive trends, capable of generating 10X returns for investors over the long-term.

The Daily 10X is like nothing else we offer. Luke doesn’t keep a portfolio or provide sell advice. But every day the market is open, he highlights a small cap stock with the potential to grow 1,000%.

It’s a lucrative approach to the markets. To illustrate, in just the past five years, Luke has recommended 17 different 1,000%+ gaining stocks. Most investors never enjoy even one such 10X-winner.

Returning to the genomic revolution, what’s the company on Luke’s radar?

Here he is with the overview:

Precision Biosciences (DTIL) is a genomics company that has built a proprietary platform, called ARCUS, to eliminate cancers and cure genetic diseases, as well as improve the future of food supply.

The company takes two approaches to gene editing. First, it goes after genetic diseases with in-vivo treatments to create permanent cures. Then it optimizes allogeneic CAR-T cells for deep and durable responses.

Luke points out that DTIL’s platform received a major validation last year, when the company partnered with pharmaceutical giant Eli Lilly (LLY) to develop in-vivo genomic-editing technologies. The first focus of the partnership will be Duchenne muscular dystrophy (DMD). Afterward, it will target two other currently undisclosed genetic diseases.

But DTIL’s future doesn’t rest solely in the outcome of this partnership. Luke notes that Precision has a proprietary platform to focus on additional therapies.

Precision Biosciences has developed a proprietary and promising gene-editing platform, which constitutes a sizable competitive moat and unlocks economic scalability — since multiple therapies can be developed on top of that platform.

Last month here in the Digest, we looked at the biotech sector.

Over the last year, it has been destroyed. As we noted, there’s no great reason other than investors have rotated out of riskier stocks/sectors.

Below, we look at the SPDR S&P Biotech ETF, XBI. Since early February of last year, XBI lost half of its value before a slight recovery in recent weeks. As I write, it’s down 47%.

DTIL’s stock has had it worse.

Over the exact some period, DTIL has fallen 68%. But as you can see below, it appears to be trying to carve out a bottom. 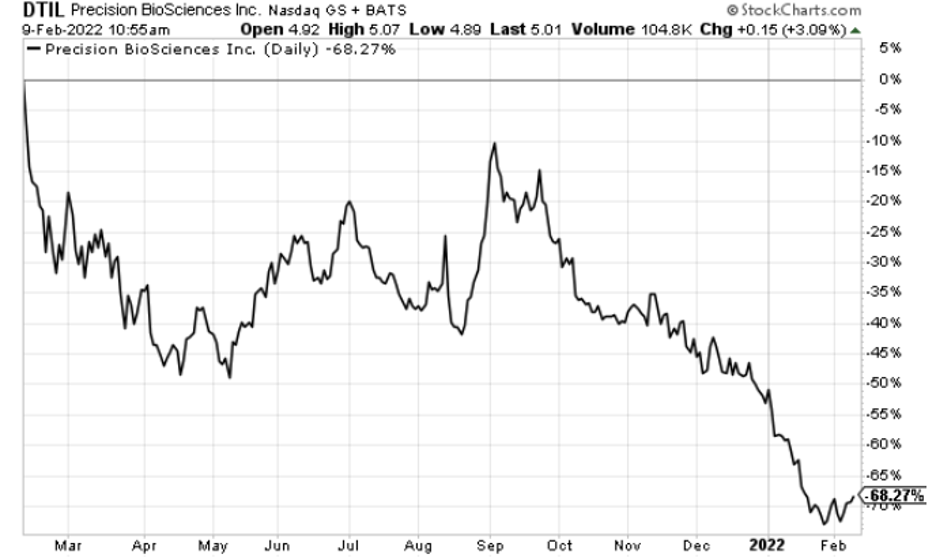 This price collapse can be seen as an extraordinary sale if DTIL’s platform and therapies perform as hoped. With that in mind, let’s look at how DTIL might 10X your money.

Backing out its $160 million cash balance, Precision is valued at merely $130 million — a cheap valuation for a promising gene-editing company with proprietary tech and a big pharma partnership.

The 2030 consensus revenue estimate for Precision Biosciences is $400 million.

That feels aggressive but plausible if the company’s pipeline develops and commercializes as expected.

Biotech stocks are averaging a 6.5X sales multiple in this market.

A 6.5X multiple on $400 million in sales implies a long-term valuation target of $2.6 billion.

Luke notes that the gene-editing industry is intensely competitive. Meanwhile, DTIL is a pre-revenue company with enormous execution risk. So, if you decide to put money into DTIL, be cautious and use a reasonable position size.

That said, the “roll the dice” scenario of a pre-revenue company with an unproven treatment is common for small biotech companies. And successful execution is how such small biotechs become enormous household names that multiply investors’ dollars many times over.

Looking bigger picture, we believe many great investments will come from the biotech sector in the coming quarters. The sector has been destroyed, despite holding the potential for society-altering medical breakthroughs. We’ll continue to bring you ideas here in the Digest. And to follow Luke’s picks like this in The Daily 10X, click here.

As to DTIL, we’ll wrap-up giving Luke the final word:

With a promising proprietary tech platform and a huge partnership with a pharma giant, Precision Biosciences is a very uniquely positioned company in a burgeoning growth industry.

Yet, despite all those positives, the company is valued at a little over $130 million ex-cash. That’s just way too cheap. And it means that if the company executes, the stock will explode higher.

Does Time in the Market Beat Timing the Market? 4 Experts Weigh In.

This “King” is a Brutal Killer